“I’ll tell you, you Chinese people get bullied right out of the womb!” – Japanese thug (Jackie Chan)

Cheng Pei-pei in her first film for Golden Harvest after her contract with Shaw Brothers and after her marriage in 1970, in which she moved to the United States, she stars as Chen Xiaoying a martial artist who gets involved with revolutionaries in the early Chinese Republic. You can date this film to 1915 since it deals with Yuan Shikai and the Twenty-One Demands which pretty much ended Yuan’s political career (he would die the following year.) Chen is involved in a plot to pretend to be the little sister of Lei Tianbao (Ou Wei) a senior captain in Beijing’s Apprehension Division to help free another revolutionary Mr. Cai currently in prison. The current administration is considered toadies to the Japanese led by Mr. Sano (Jô Shishido) and they must be stopped. She goes with her “aunt” Xu Feng who happens to be a martial artist and from the School of Fists and Fury -- I hope this is the correct translation as it is too cool. She must fool her “brother” and help the cause. Will she triumph?

Lo Wei has a habit of reusing material to the point of redundancy. One can argue that an auteur will revisit themes, reusing them, manipulating them like with the “wrong man” scenario of Hitchcock or Wong Kar-wai’s fascination with unrequited love. But there is a fine line and it can be easy to delve into laziness. Lo Wei had a hit in Fist of Fury, so he revisited that movie’s themes a couple of times including this and New Fist of Fury with Jackie Chan. This was not new with him though as you can see several similar “spy” pictures he did with the Shaw Brothers like The Golden Buddha and Summons to Death which are almost remakes of each other. I wonder how many times he played a cigar chomping bad guy in his movies. There are many similarities in this film beyond the Japanese antagonists in the Republic era to Fist of Fury which is a topic that had already been done Ad Nauseum that past few years (Hapkido, Lady Whirlwind, The Bloody Fists). You have a protagonist that is very strong. You literally copy a famous scene twice using the same music cues where Bruce Lee famously was shown in slow motion with trails of his arms showing though Cheng Pei-pei is using her legs. You have an ending that combines several elements of the previous movie. I bet a back-to-back rewatch of the two could unearth more similarities.

There are also a plethora of plot problems some I cannot divulge without spoilers. One of the funniest I have seen in many films is when characters look aside to each other as to show the audience they know something the other characters are not aware of – which we already know so it is redundant. Well when you are a spy and you do that in front of your enemies you look even more like an idiot and risk blowing the mission.

Surprisingly this film has one aspect better than Fist of Fury. You have a legitimate antagonist in Ou Wei, who unfortunately died way too young that year of kidney failure, whose acting ability allow sympathy for what could have been a stock bad guy character. I was quite impressed with his performance and Lo Wei allowing him to show nuance where often this type of character is one-dimensional at best. Just compare his performance to Lo Wei.

The cinematography from Chan Ching-Kui is surprisingly good at times. There are some exquisite shots using deep focus, composition of the whole frame and movement that is better than most Golden Harvest movies. The set-design which seems to also have a higher budget than most Golden Harvest films really helps out the look. Now only if the pacing of the film was better as it moves at a languid pace without really affecting the plot, mood or anything else. When I saw Jô Shishido, who was famous for not only his cheek implants but several films with director Seijun Suzuki (my favorite is Youth of the Beast), I was hoping more of him then what was shown.

When trying to figure out the success and/or failure of the action scenes one has to look at the combination of the actors, director and action director(s). Some action directors are left to their own devices and sometimes the director can be the biggest influence. So often we are left speculating on who has the biggest impact on the fight scene. Han-Ying-chieh* (he plays an “assassin” in the film) had a long and distinguished career as an action choreographer. He was a mentor to many including Sammo Hung, who in my opinion, would outshine him soon in this area. Han’s Peking Opera background (Fu Lian Cheng which was established 1904 and closed in 1948) is obvious (Chang Cheh decided on not using him in the 1960s instead going with Tong Gai and Lau Kar-leung**) and his set-up of fight scenes did not always take advantage of cinematic techniques. He tends to block action with a somewhat proscenium approach that reminds me of how Charles Chaplin (whom most of the Japanese are wearing his type of mustache) would film a scene for most of his career. Sometimes it is hard to take the “stage” out of the Peking Opera performers. Now this approach works fine with Cheng Pei-pei who can string combinations of kicks together though others like Ou Wei and even James Tien do not fare as well. There is an exception in the final fight scene with Jô Shishido which is a bit more inventive and uses object, doors and a variety of moves (it is also one of the few fights that is not a squash, aka a fight where Cheng is not completely dominate.) Even though the film is mostly grounded in realism there are several superman jumps where an individual has super jumping power (done by running the camera backward), which Han has a lot in his work over the years. Han was also know for using trampolines*** in his choreography, he is credited for being one of the first for doing so in film, which he uses minimally here. He also incorporates a decent amount of Judo (mostly wrist locks that result in throws because anyone can use these as long as the opponent can flip over) and some Karate. The action is solid but not spectacular and unfortunately not enough to offset the mediocre script.

I think fans of Cheng Pei-pei will like this more than most as she is one of the high points. It is a decent film but plods on at a slow pace without adding anything that fans of Hong Kong cinema have not seen before. While there is some good camera work, a solid performance from both Cheng and Ou, the Japanese are stereotyped and this really is nowhere near as important (though no less racial) or as exciting as Fist of Fury. Now fans of Jackie Chan who want to finish his filmography will also have to see this. He has a decent small role as a Japanese who does not like his soup too cold. But check out that table he is on. It has him and fellow Peking Opera brothers (known as the Seven Little Fortunes) Yuen Wah and Corey Yuen. That table would soon be outshining everyone else in this film in the Hong Kong industry.

The DVD I have is the Martial Arts Double Feature with this and Whiplash from Shout! The print is decent while some fading and color issues do appear. While I am not 100 percent sure it does look like it suffers from PAL-to-NTSC conversion issues which makes movement not as clean as it should be especially in the fight scenes. The subtitles are good so it looks to be a better translation than the Joy Sales version. It comes with the original trailer (3.24m).

* When he is credited with Bruce Lee as an actor, Lee would be in charge of the fight scenes he was in while Han would handle the rest. You can notice this difference especially in The Big Boss.

** This started with The Magnificent Trio (1966). One can speculate on the reasons as he does not directly state why. He most likely wanted to have a more realistic approach (relatively speaking) to the choreography. This is what I gleaned from his autobiography, but you can read into his statements on the subject in different ways.

*** From The Shaw Screen: “In 1961, he participated in Yue Feng’s The Swallow Thief/Yanzi Dao as stand-in for the film’s star, Linda Lin Dai, and came up with the idea of using a trampoline to create levitational movements. Consequently Shaw Brothers signed him up as chief martial arts director.”

Questions/Comments:
The film ends with the music cue “Also sprach Zarathustra” from Richard Strauss. Most known for being in 2001: A Space Odyssey.
If you know what dance school Chang Pei-pei opened after she left Hong Kong please tell me.
If you know more of the reasons why she came back and worked for Golden Harvest after her marriage also post please. 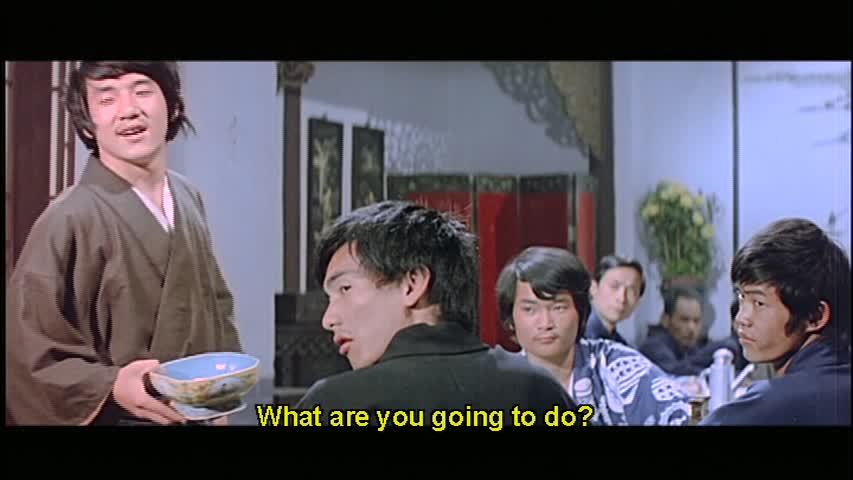