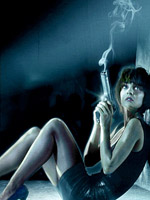 I have had a blog on google blogger for a while at http://hong-kong-actresses.blogspot.com/ I thought I would try to make a couple of bucks from it so if anyone here would like to go to that site and click on an add (they are, as one could expect, pretty lame) I would appreciate it. Just one click I imagine because google has (or at least they say they have) an algorithm for detecting phony clicks that is both omniscient and omnipotent, thereby solving the ontological paradox of the existence of God, although maybe that is just a rumor the google started to impress people like me.

My blog is almost a supplement to Dennis Lee's--I use his http://yellowcranestower.blogspot.com/ often as a pointer to the right pages on CRI or SINA.


OOPS--it seems that blogger is in read only mode while google tries to fix something they screwed up last night....

I don't know if this internet thing will really catch on.