You are not connected. Please login or register
2 posters

Still in first draft mode; but I'm not sure when I'll get around to reworking it. There is some information I am still looking for. Does anyone know if Sammo stated that Jackie stole from him or if Sammo apologized to Jackie? I've read both accounts, but have not been able to find an exact interview (I was able to find an exact interview of Jackie stating that Sammo stole from him).

How is it that Sammo who directed such classics as Warriors Two and Prodigal Son could helm this? While I have not seen most of his 1990s output this film persuades me to agree with the consensus that his earliest films are best. Filmed near Del Rio, Texas, and takes place at Fort Stockton (probably California, but there is a Fort Stockton in Texas as well).

This is the six and last Wong Fei-hung in this particular serious though the first one with Jet Li since the third film. The movie was a hit in Hong Kong. Wong has traveled to the States with sidekick Seven (Xiong Xin-xin: Shaolin(2011)) and Aunt 13 his fiancé (Rosamund Kwan: Project AII) to visit the anniversary of the Po Chi Lam clinic, picks up a lone blonde gunman named Billy who was about to commit suicide because he was drying up in the dessert. By happenstance during an Indian attack Wong gets amnesia after hitting his head on a rock in a river, but luckily gets adopted by a tribe when he is found. Meanwhile when the others make it back, they find the suffocating nature of the racism against the Chinese in the local town stifling and ultimately several of there lives are in danger when they are framed for a local robbery.

The making of this film caused a rift between Jackie Chan and Sammo Hung. The amnesia angle was later used in Jackies Who Am I? and some of the western plot was used later in Shanghai Noon. This has lead some to suspect that Jackie took the ideas from Sammo; however, Jackie had been discussing doing an eastern western for a few years before this movie and has publicly stated that he talked much of this over with Sammo during the filming of Mr. Nice Guy and accused him of stealing these ideas. I am apt to believe Jackie at this point because of the string of unsuccessful films Sammo had done before this film and this movie feels like it was quickly made.

Movie tid-bit I found fascinating -> I love finding connections in film. Here we have Jeff Wolfe who plays Billy, one of the few decent Caucasian actors in this movie, is the recipient of the infamous head stomp in Drive (2011).

This film really makes you appreciate Shanghai Noon. The acting from the Texas cast is quite bad. The action cinematography is not good either. I think the main problem with this lies with the overused combination of non-stuntman getting beat up by professional athletes. There are two good non-Chinese athletes in the cast with Jeff Wolfe and main bad guy Joseph Sayah. But Wolfe is underused and it is an understatement to say Sayah cannot act. There are several decent action scenes like Sayah versus Jet Li at the end, though Sayahs facial features and dialog help spoil it. Honestly Xiong Xin-xin looks the best at fighting in this film though one wonders why he has his head cocked most of the time. There is also several nice comedic scenes like when Wong completely harangues his compatriots into sleep, but the comedy is overused and actors like Richard Ng feel completely underused.

The disc I have is the China Star R0/NTSC release with removable English subtitles. I have read that this is non-anamorphic and I believe that since it is a late 1990s DVD release. However, the subtitles, while decent in the translation, are off-time especially later in the film so you are getting a two-four second delay. This is annoying. This is very annoying. There is a Making Of extra that is not subtitled, but has several minutes of interviews in English.

Links/Notes:
The plot synopsis on IMDB is completely wrong.
This will not be in my top 100 HK film list.
If I do a proper review of this I will have to find out whether this movie takes place in CA or Texas (filmed in Texas though). I will also concentrate on noting the issues I have with the cinematography as well and will have to expand the plot.
On Filming Location
Jackie Chan stating Sammo took two of his ideas.
End of Film .
Brian T 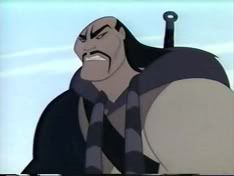 I always get a creeping sense of dread whenever a Hong Kong movie ventures outside of Hong Kong/China to areas where the filmmakers have to recruit locals to play parts. More often than not, they recruit dreadful amateurs who make their scenes almost unbearable (but who are often hired solely because they know martial arts, just like their likewise frequently awful gwailo counterparts in Hong Kong). Maybe Hong Kong audiences appreciate the exotic flavour and can't tell a canned ham from a fine sirloin, but I strive to give them more credit than that, at least until I pop in another disc (even new ones sometimes!) where the Hong Kong characters travel to some English speaking country and suddenly encounter another batch of gwailo dinner theatre rejects, after which I just scratch my head. After this many years, you'd think they'd get it right more often than not, but that's still rarely the case. Even though I generally disliked the movie, I was extremely grateful that the makers of GEN-Y COPS actually had the foresight to cast bonafide American actor Paul Rudd in a major role. Shame about the film, but still . . .

^ Awesome picture there. Yes he does look like that. I'm a bit surprised you had seen OUATICAM film (should I be?).

I actually found Jeff Wolfe to be decent and a few others, but yeah the acting was from bad to worse.

Brian (or anybody), do you know if Sammo publicly apologized for this film? I've read so many varying accounts (thank goodness I found JC being mad at Sammo though) on this that it is driving me crazy like many other Hong Kong "facts."

I'd rank the first RUSH HOUR just slightly higher than SHANGHAI NOON, but's it largely a tie. I'd place SHANGHAI KNIGHTS, however, well above the second and third RUSH HOUR films (especially the third one, which I thought was awful), and probably on par the first one, which would tie them for my favourite American Jackie Chan movies, though in comparison with his HK output, that's really not saying much.

I believe I saw ONCE UPON ... CHINA & AMERICA at a one of the Fantasia film festivals that were held in Toronto over a decade ago. I have faint recollections of people sniggering at some of the bad performances, which probably wasn't what the filmmakers intended. Then again, they should've known even then that films such as this might travel outside Hong Kong and Asia and therefore spent a bit more money on a savvy casting director. I can't imagine younger, North America-born Chinese viewers don't find these kinds of amateurish shenanigans as annoying as we do. Its popularity in HK was no doubt in part due to the tried-and-true formula of taking a then-popular franchise and transporting it to a foreign land, not unlike various Hollywood movies have done, though Hollywood more often finds trained actors among the local populations to fill out the cast, rather than half-assedly scouring high school drama clubs and little theatres, as it seems was done here. I'm not certain if I have OUATIC&A on DVD or VCD; I hope so, as I never did put together a review for it, and it would be handy to complete the set.
Sponsored content